Virtual armies and the evolution of language 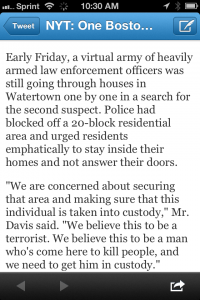 I was trying  trying to keep up with the events taking place in Watertown at breakfast Friday morning, when I read this sentence on Twitter:

Early Friday, a virtual army of heavily armed law enforcement officers was still going through houses in Watertown one by one in a search for the second suspect.

I know the article meant that there were so many officers they virtually made up an army. However, in a world of technological advancements, including drones, GPS tracking through cell phones, and “virtual” games, shopping, and other inventions, my mind immediately envisioned an actual “virtual army.”

At first, I was amazed that we are now so technically evolved the FBI was able to send a virtual army to the Watertown neighborhood to ferret out the escaped Marathon bomber.

Of course, I realized within a few seconds that this wasn’t possible, but it was a quick lesson in the evolution of language. The primary meaning of virtual for me has changed. I think “virtual reality” first, then remember the traditional meaning: “in essence.”

1
: being such in essence or effect though not formally recognized or admitted <a virtual dictator>
2
: of, relating to, or using virtual memory
3
: of, relating to, or being a hypothetical particle whose existence is inferred from indirect evidence <virtualphotons> — compare real 3
4
: being on or simulated on a computer or computer network<print or virtual books> <a virtual keyboard>: as

a : occurring or existing primarily online <a virtual library><virtual shopping>

b : of, relating to, or existing within a virtual reality <avirtual world> <a virtual tour>