The Batmobile by Katherine Billings Palmer

I was a nervous child of a nervous mother, not a good combination. From my earliest memory, I worried, and there was so much fodder for my angst.

What if my dog ran away?

What if the teacher called on me in school?

What if my uncle got so drunk he killed the family?

What if the school burned down and I died? There would be no one to take care of my mother.

How would she cope without me?

I vomited on the way to school every morning in kindergarten. In first grade, I was so tense and preoccupied, that I tripped and fell nearly every day on the way to school, ruining the knees of two to three pairs of tights a week. I cried at the slightest incident, mostly when there was something I had never experienced before. Substitute teacher? Having eye exams at school today? Anything and everything set me off.

When I was about eight, my cousin asked me to be in her wedding as a “junior bridesmaid.” I was excited and scared. I went for one dress shopping expedition, then was abruptly told by my parents that I was too emotionally unprepared to be in a wedding. In essence, I was fired.

As nervous as I was, my mother was worse. Looking back, I now realize she was probably agoraphobic, but in the early 1960s, she was simply considered a nervous woman.

My parents rarely socialized, although my dad secretly had some quality time with coworkers at a local bar after work a couple days a week. He told my mom he was working overtime nearly every weekday, but on a few of those days, he punched out early and met up with his friends. She busted him on that one pretty early on, simply by calling him at work. In the days before cell phones, that was an easy catch.

So, although my dad was a sort of social butterfly on the sly (if that term can be applied to men), Mom had no female friends, and my parents never had people over. Mom couldn’t work, and never had, because she had been sickly as a child. She had a goiter at age twelve, then for some reason, couldn’t leave the house to return to school past the eighth grade. She simply said she was too sick to go to school or work, so she stayed home with Grandma and became a teenaged homemaker.

Not that grandma couldn’t use the help. Her two oldest children went off and married, only to return home divorced a few years later. The two middle children never married, and also never left home. Mom was the fifth child, and she obviously wasn’t going anywhere. In a home with five single adults, two parents, and one grandchild (brought back with one of the returning divorcees), there were lots of chores and there was a lot of cooking to do, so it was nice of my mom to stay home and help. When she turned 24, all that changed.

Dad carpooled with mom’s dad, and one day when he dropped off Grandpa, he was invited in. Unlike today’s singles with their group meets and “elimidates,” mom never even had to leave the house. Prince Charming walked in the door and swept her off her feet. She was Irish Catholic and he was a “dirty Protestant,” so they had a simple wedding in the priest’s home and a small breakfast reception.

Oddly enough, for their dream honeymoon, they planned a weekend trip to Cleveland, Ohio, to visit Grandma’s cousin, Sister Blanche, at the convent where she lived. Shortly after arriving from their three-hour trip, my mom received a phone call informing her that her dog was sick from eating rice at the wedding, so they promptly returned home. Yup, agoraphobic.

After the honeymoon fiasco, Mom and Dad took up a blissful residence in his parents’ finished basement. Five years (and two children) later, they finally moved out. My grandpa had sold the house in order to retire with Grandma to their newly built home three hundred miles away. Mom and Dad were forced to find their own home.

So, from the age of five, I grew up in a cozy little bungalow in a safe Detroit neighborhood, with two loving parents — one of whom was tense, nervous, and afraid. As role models go, they taught me to love fiercely, but fear most everything, and definitely take no chances.

My only hope for any normal experiences came from a neighbor mom, Marlynn Hallman, owner of the Batmobile.

Mrs. Hallman feared nothing and championed us all. When I was about eight years old, she started a Bluebird troop in her basement (this was the junior version of the Campfire Girls). I pleaded with my mom to let me join. All the neighbor girls would be in the group. She finally relented, but warned that she wouldn’t be involved in any way at all. She couldn’t, she explained, because she was an “older mother.” She was 32.

In fact, the young Mrs. Hallman was probably a few years older than my mom; nevertheless, she took on the group of high-spirited, giggling girls. We invaded her home every Tuesday night and learned to make crafts, read a water meter, and become accomplished at any number of new skills in order to earn the brightly colored wooden beads that we sewed proudly onto our little navy blue felt vests.

The best part of Bluebirds and Campfire Girls was the field trips: Milky’s party time, bakery assembly lines, milk bottling plants, farms, museums, apple orchards… you name it, we did it. And I handled each event like a champ!

I remember one fateful outing vividly: a field trip to the Henry Ford museum, an overnight event. Gulp. I can do this, I told myself, so I joined a gaggle of girls who explored historical artifacts, enjoyed camaraderie, and chattered the night away in our dormitory bunk beds. The next day, we dressed and quickly packed our belongings. I was brushing my teeth and chatting with my friend Cindy in the large bathroom, when we realized all the other girls were gone. We were stranded and alone!

We ran to get our bags and hit the halls, searching for our troop. A snarly museum employee snatched us up in the hall and began to berate us for wandering around alone. The two of us were speechless, tearful, and filled with trepidation. I, of course, feared the worst. Would she throw us in jail? Would we ever find our friends or see our homes again? My life as I knew it surely was over.

The woman continued her tirade. We continued to cry. Suddenly, in swooped Mrs. Hallman, red-faced and livid.

“What are you doing to these girls?”

The woman explained that she was simply telling us that we were not to run the halls without our group.

Mrs. Hallman, bristled in our defense.

“These are your guests, they are obviously lost; how dare you treat them like this? C’mon girls! We’re outta here.”

She grabbed us by the arms, and we made our escape.

From that day forward, Mrs. H. was my hero. I can honestly say neither of my parents would have had the gumption to defend me so valiantly, ever.

I don’t know much about car makes and models, but Mrs. Hallman had a beauty. This car was long and black, with fantastic looking tail fins, and, best of all, it was reserved for special occasion rides to school.

Everyone walked to school in the 1960’s. But sometimes, when the snow was high enough, or the rain torrential enough, Marlynn Hallman would proclaim, “C’mon kids…jump in the car,” and eight or nine children would snatch up slickers and schoolbags and cram themselves into the big black auto for the four-block ride to the elementary school.

In my head it seemed she said, “C’mon…to the Batmobile!” And off we drove, safe from the elements, snug and warm (and squished on top of each other) with this lively, audacious mom at the wheel.

I don’t think Mrs. Hallman ever had a clue about the impression she made on my life. She was a woman who was brave and strong and spoke her mind, in a world where I had learned that to be female meant to be weak and helpless — and afraid of most things. She led girls on adventures, made sure they were taught how to navigate the world, and through her example, taught them to fear a little less and attempt a little more.

She was a take-charge kind of mom, who often took a maternal role with the neighborhood children. It was usual to hear her bluntly tell a child, “I’m cold. Put a sweater on,” or “It’s raining; go home and get your boots.”

That vision of her rushing in to defend my frightened little self from a snarly old museum employee is a scene I haven’t forgotten nearly 50 years later.

I’ve overcome most of my fears throughout the years, thank God. I slowly gained confidence as I matured, and I was fortunate to befriend other strong female role models as my own mother grew increasingly more unable to cope with the outside world. There’s not much I’m afraid of today. But I know as a timid little girl, I found my first hero in a neighborhood mom who I’ll always remember as the Supermom with the Batmobile. 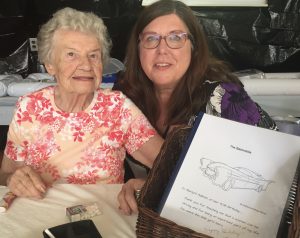